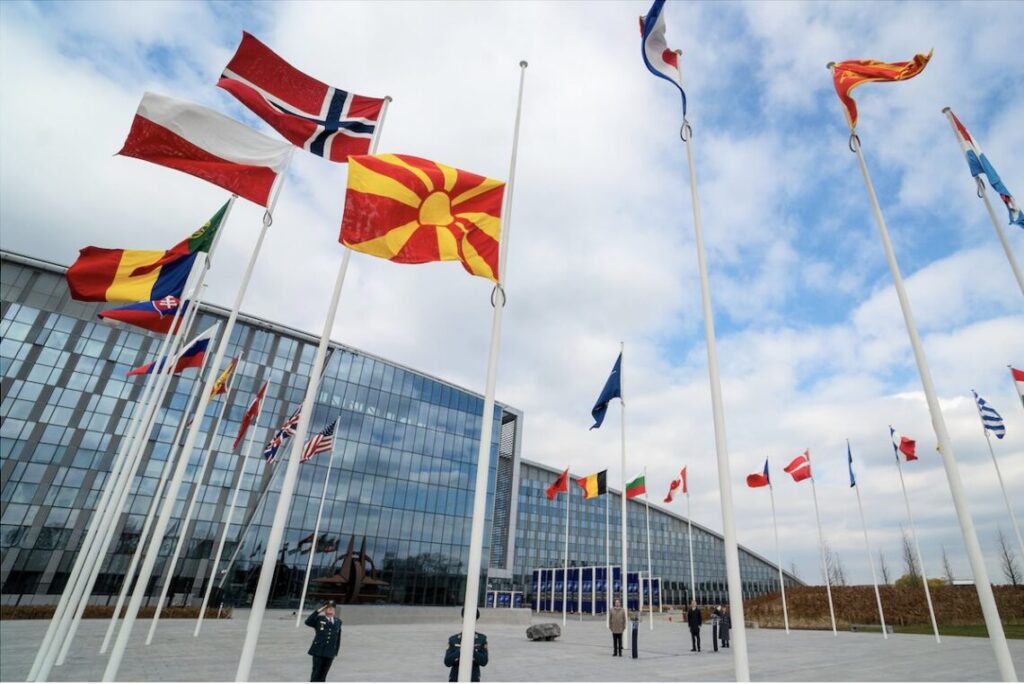 Finland’s possible NATO membership would not be a simple matter of announcing the intention to join, but the product of a multistage diplomatic process. Kalevi Sorsa Foundation publishes an article by Associate Professor Aleksandar Spasov, describing North Macedonia’s path to NATO membership in 2020. According to Spasov, North Macedonia avoided Russian counteractions due to its geographic location and fortunate timing.

On 27th March 2020 North Macedonia became the 30th and newest member (until now) of NATO. The process of joining the military and political Alliance that lasted for long 27 years, involving numerous ups and downs, was completed by raising North Macedonia’s flag in front of the NATO HQ in Brussels three days later, on 30th March. The traditional solemn ceremony that was supposed to mark the fulfillment of one of the two main strategic goals of the country (joining NATO and EU) ended up as a modest event with only a few present on the spot, due to the travel restrictions imposed during the COVID-19 pandemic. Only the melody of the national anthem “Today over Macedonia arises new sun of the freedom” for the Macedonian citizens that watched the ceremony on TV pointed to the main arguments why the country struggled for such a long time to join NATO: to integrate its security in the collective system of security (as stated in Art. 5 of the NATO Charter) and to be recognized as a constitutive part of the Western world.

The process of joining NATO for North Macedonia (until 2019, according to the Constitution, only Republic of Macedonia or with the UN provisional name “the former Yugoslav Republic of Macedonia”) beside following the established pattern for every country that wants to join the Alliance (application, Membership Action Plans including reforms in the defense, functional democracy and political stability and reliability to become an ally, followed by invitation by the North Atlantic Council, signing of the Accession Protocol, ratification by all member countries and, finally, the deposition of the Instrument for Accession or the ratified North Atlantic Treaty at the State Department in Washington) had many specifics related both to the country and the wider regional context.

The country started the process with the adoption of a Parliamentary resolution in 1993. In 1995, after the end of the first phase of the wars in former Yugoslavia in which Macedonia was not directly involved, the country joined the NATO initiative “Partnership for Peace” which for many was considered to be preparation and a waiting room for NATO. During the 1999 NATO-led military campaign against then FR Yugoslavia and the regime of Slobodan Milosevic, Macedonia hosted NATO forces and served as a host country during the establishment of the Kosovo Force (KFOR), led by NATO with the task of securing peace and order after Yugoslav forces left the province following the Kumanovo Agreement between the Yugoslav Army and NATO.

In 2001 NATO helped Macedonia by organizing a campaign for the disarmament of the insurgents of the so-called NLA (ethnic Albanian insurgents in Macedonia) following the Ohrid Framework Agreement that ended the conflict. Finally, Macedonia participated with its military in the ISAF (International Security Assistance Force) of NATO in Afghanistan.

The name becomes an issue

In 1999 Macedonia joined the first MAP (Membership Action Plan) and continued to synchronize its defense and military with NATO standards. In 2003 the country, alongside Albania and Croatia, joined the US-sponsored initiative “Adriatic Charter” designed specially to prepare the three Balkan countries to join NATO. In 2008 during the NATO Bucharest Summit, contrary to the expectations and the announcement of US President Bush, Macedonia did not get the invitation to join NATO. The decision was blocked by Greece because of a longstanding dispute over the name of the country and only Albania and Croatia were invited to start the accession talks to join NATO.

From 2008 began the next substantially different phase in Macedonia’s road to NATO. Although the country continued with MAPs and intensified relations with the Alliance, its membership became fully dependent on the resolution of the name dispute with Greece. The Government led by the former PM Nikola Gruevski, that gradually became authoritarian, started a campaign of turning to ancient history and re-vamping the capital Skopje with sculptures dating from that era, which gave an additional “argument” to Greece to continue the blockade.

The turning point in the Western, above all US, attitude towards the issue was the first Ukraine crisis in 2014 and the annexation of Crimea by Russia. The unfinished business on the south wing of NATO and the increasingly aggressive Russian statements increased Western pressure on both sides to find a mutually acceptable solution to the, in its substance, irrational dispute. However, the solution was only possible after the change of the Government in Macedonia (and the softer approach of the then Greek government led by the former PM Tsipras). In 2018, the “Prespa Agreement” between the two countries was signed to resolve the name issue. Macedonia changed its name to North Macedonia and Greece recognized the separate Macedonian identity and language and lifted the blockade for the Euro-Atlantic integration of the country. In 2018 NATO invited the country to start the accession talks, in 2019 the country signed the Accession Protocol and in 2020, as already said, North Macedonia became a full member of NATO.

Until 2015 the Russian reaction regarding the aspirations of North Macedonia to join NATO was virtually non-existent. The only exception was 2001, during the armed conflict in Macedonia, when Russia directly accused Kosovo under NATO military control of supporting the ethnic Albanian insurgents. Even after the famous speech of the Russian President Vladimir Putin in the Munich Security Conference in 2007, Russia did not pay much attention to Macedonia’s road to NATO. The reason may be that Russia was convinced that no solution between Greece and Macedonia, as a precondition to join NATO, was in sight, but more likely Russia was disturbed by the verbal statements of the then US President Bush that Ukraine and Georgia should also be invited to join NATO.

The first vocal Russian reactions came after the start of the political crisis in Macedonia in 2015, triggered by a mass wiretapping scandal, presented to the public by the then opposition leader and afterward PM Zaev, and conducted by the Macedonian secret service led by a close relative of PM Gruevski. The crisis ended in 2017 with the storming of the Parliament, secretly organized by Gruevski loyalists and the outgoing government, and the change of the government after a new speaker of the Parliament was elected. Russia, on several occasions, stated that the “crisis is sponsored by the US and the West” and that the end goal is to “change the country”. These statements seemed absurd since Macedonia openly strived to join NATO and set it as a strategic goal since 1993, but in order to understand them one has to have in mind the completely changed geopolitical context after Putin returned as President in 2012 and after the “Euromaidan” events and the first Ukraine crisis.

Russia’s next reaction came during the referendum on the Prespa Agreement organized in Macedonia in the autumn of 2018. Since the citizens were asked in the referendum whether they “accept the Prespa Agreement in order to join EU and NATO” the campaign of the opponents was logically focused on, among other issues, the Euro-Atlantic integration of the country. The “counter-campaign” used similar methods and tactics as seen during the presidential elections in the US in 2016, which led many to conclude that there was Russian interference. Although these allegations were not (at least) publicly proved, Russia vocally reacted with statements by the Foreign Ministry that North Macedonia will have to face consequences because of the decision to join the Alliance since Russia sees the Alliance as a strategic opponent.

Bearing the aforementioned in mind, we can conclude that North Macedonia managed to complete the accession process to NATO and avoid a harsh Russian reaction, apart from verbal attacks, because of the timing – before the current crisis in Ukraine – and because of the concentration of Russia on eastern rather than on southeastern Europe.

Dr Aleksandar Lj. Spasov is an Associate Professor at the Faculty of Law “Iustinianus Primus” at the University “Ss. Cyril and Methodius” in Skopje, North Macedonia and a political analyst and advisor with a focus on foreign policy, international law and political education. The positions presented in the article are the personal opinions of the author.