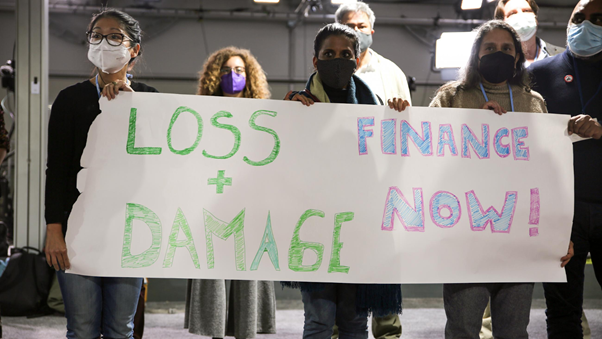 The Decisive Decade for Progressives

Climate justice activist Nathan Thanki calls for unity between progressive political movements in developed world and developing countries. He provides a critical overview of COP26 in Glasgow and calls for fair and ambitious progress especially on climate finance.

Progressives of all stripes in the developed world face a daunting challenge in the coming “decisive decade.” Not only must we prevent the further expansion of fossil fuels in our own backyard, but we must also – even in contexts of austerity and rising inequality within our own countries – unambiguously support the call for massive transfers of money to the developing world. Without this financial support, there is simply no possibility of averting, adapting or coping with the climate breakdown.

The recently concluded COP26 climate change summit in Glasgow illustrated just how great our challenge is. The result of the negotiations was not a good outcome that could have been better. It was a bad outcome that could have been even worse. Or to put it another way, Glasgow was the latest step in a long journey that developed countries have compelled the world to walk, away from the equity principles the UNFCCC is founded on: ”common but differentiated responsibilities”. The current trend is towards a model in which the intransigence of the richest historical polluters allows them to decarbonise on the same timeline as everybody else. Carbon colonialism, as Bolivia put it in Glasgow.

The critical issue of climate finance was one of the most difficult ones in Glasgow. It is abundantly clear in the decision documents that developing country priorities have been systematically side-lined. Developing countries had floated the figure of $1.3 trillion/year in conversations about a new collective finance goal – while the estimated need is even greater. However, developed countries would not entertain this, when they have failed to meet the current goal of $100 billion/year.

Nevertheless, the developing countries managed to keep the flame alive and ensure long-term finance remains an agenda item, and secured a mandate to work on definitions of climate finance. In future years this may spark into something greater, but it is of little use or comfort to those already staring down the barrel of climate breakdown.

One of developing countries’ main fights, and it has been a fight, over the past three decades has been for extra finance specifically to prevent and address loss and damage arising from climate change. This demand has been keenly suppressed by developed countries, including in Glasgow. In the end, rich countries were forced to concede to provide some funds to set up and run the Santiago Network on Loss and Damage, agreed in 2019 in Madrid as a complement to the existing Warsaw International Mechanism on Loss and Damage.

In Glasgow, there were some other procedural advances, such as agreeing to the functions of the Network. However, the unpleasant truth is that developing countries were ultimately fobbed off with a 2 year “dialogue” as developed countries consistently passed the buck of responsibility. Essentially developed countries offered to pay for consultants to tell poor nations where to access information that may help better organise responses before and after disaster strikes, but they will not give a cent for the preparation or actual clean up.

Developing countries did note for the record that they understand the dialogue will result in a finance mechanism for loss and damage being set up in 2023. For that to happen though, the climate movement in the developed world must make climate finance, and specifically finance for loss and damage, central to our political demands and programmes in the domestic as well as international sphere. We are a very long way away from true climate reparations, and there are cultural and non-economic losses that no amount of money can make up for, but we must make this our thickest red line.

The decision by Scotland to pledge £1 million in recognition of the need to make reparations opens the door for other developed countries to finally accept responsibility for the climate chaos that is currently unfolding, and start doing something about it. Now, climate movements progressive politicians must keep pushing.

It is troubling that Glasgow is presented as a success, when the outcome allows countries to achieve their already weak mitigation pledges entirely through purchasing carbon credits on the voluntary market under Article 6.2 of the Paris Agreement. There is not enough carbon budget or indeed not enough earth available to faff around with huge scale carbon offsetting.

Nothing has been learnt from previous blunders. The UN system now stands poised to make new blunders through the mechanism under Article 6.4 which will allow hundreds of millions of tonnes of virtually worthless credits from the Kyoto regime to be transferred. All while maintaining loopholes in forest and nature-based removals. One of the quid pro quos involved to help the poor and vulnerable nations swallow the bitter pill of carbon markets is that some small percentage of the profits generated could be used to help them adapt their societies to future climate impacts. But in Glasgow even this meagre crumb was denied them.

If we are reliant on the mitigation sections of the Glasgow decision to keep 1.5C alive, the goal is as good as dead. The IPCC says that for a 50% chance of staying below 1.5C, the world can only emit a further 500 GtCO2. At current rates we will burn through that in under a decade. All that one can point to in the COP26 texts are yet more dialogues, round tables, and workshops. Most of the optimism surrounding net-zero by 2050 rests on promises of future action, in many instances future action based on as yet nonexistent carbon removal technologies, rather than plans to immediately begin the process of a just transition away from fossil fuels.

Developed countries have been responsible for nearly 80% of past emissions. Now it seems like they only pretend to care about climate change while maintaining the global inequality which keeps them rich. The current plan to tackle climate change is one that hurts developing countries, masks the historical pollution, and conceals plans to emit even more CO2 in coming years. All this behind the tried and tested strategy of blaming India and China for slow progress. In the UNFCCC this is always met with resistance, as witnessed in the closing plenary of COP26, where India, China, South Africa, and Nigeria all made the case for equity and criticised the hypocrisy of the rich world.

Progressive movements in the developed world must stand with developing nations – not on the question of who gets to pollute, but rather on the questions of who will pay to ensure they don’t have to pollute. And who will pay to limit, avert, and respond to the climate disasters already happening as a result of historical pollution. The next two COPs (in Egypt in 2022 and UAE in 2023) will be timely tests of how much we have shifted the dial on climate finance. Progressives in the rich world should have their homework done by then.

Nathan Thanki works in service of the Global Campaign to Demand for Climate Justice and attended the Glasgow climate talks as an NGO observer. More of his writings can be found here.