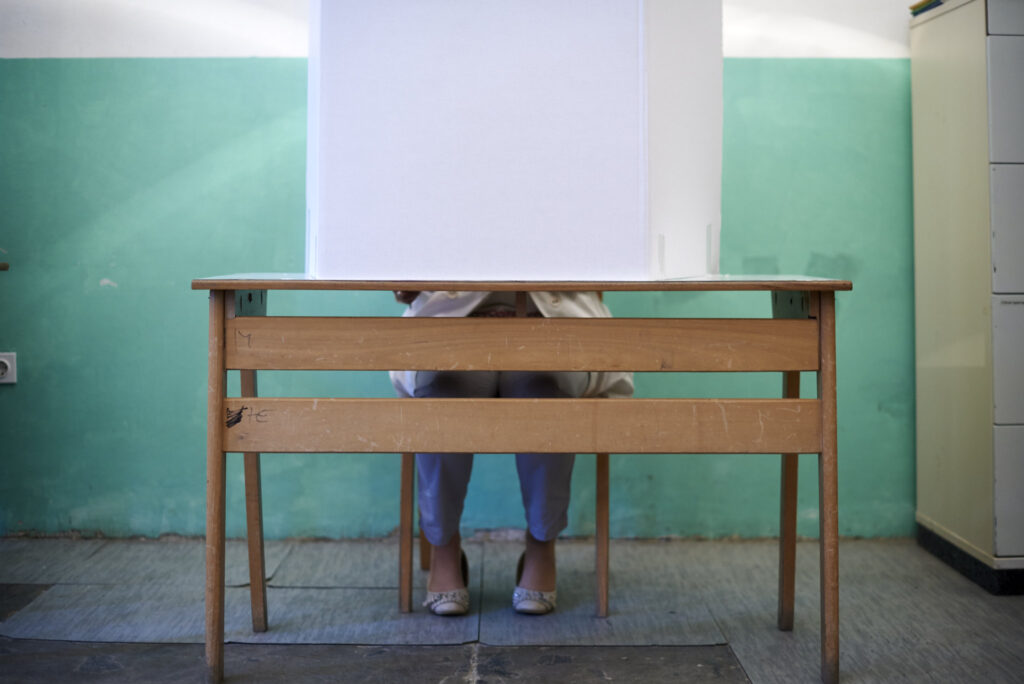 Bosnia and Herzegovina is a country with a complex administrative structure and a strong foreign influence. In this article, Hamza Pecar ,of the Sarajevo-based Forum of Left Iniative, analyses the country’s parliamentary elections which were held in October.

Administrative structure of the country

Bosnia and Herzegovina has a decentralized administrative structure. The country has four different levels of government: state level, i.e the central government, entities, cantons, and the local level. The state is the highest of them. In its parliamentary elections, members of the Presidency and representatives of the lower house of the parliament are elected. The Presidency consists of three presidents (one Croat, one Bosniak, and one Serb).

The central government’s parliament has two chambers. The 15 members of the upper house represent the country’s three ethnic groups (five per group). Each ethnic group has a right to veto all legislative procedures. The members of the Presidency also have the right to veto. Often, the veto has been used as a political pawn to make decision-making difficult, which has led to numerous political crises and a non-functioning central government.

The House of Representatives, on the other hand, has 42 members, of which 28 come from the Federation of Bosnia and Herzegovina and 14 from Republika Srpska. Representatives are elected by proportional list election.

Entities are the second highest level of governance. The Federation of Bosnia and Herzegovina and Republika Srpska make up the country’s two entities. The appendices federation and republic have no real political or legal meaning. They are remnants of the war and are included in the Dayton Peace Agreement.  In practice, the entities are administrative structures similar to states of the United States.

Entities have been given extensive autonomy in the constitution to manage internal affairs. It includes healthcare, law enforcement, judiciary, and education. Entities do not have the authority to deal with foreign relations, monetary policies, foreign trade, customs, immigration, implementation, and enforcement of international court decisions, armed forces, and external security, as they are the responsibility of the national parliament.

Both the Federation of Bosnia and Herzegovina and Republika Srpska have their own constitutions, harmonized with the state constitution. They have also their own parliaments, presidents and vice presidents, and governments which include the prime minister and ministers.

Cantons form the next level of government and exist only on the side of the Federation of Bosnia and Herzegovina. In Republika Srpska, on the other hand, power is centralized. Although the cantons are geographically divided, some of them still reflect ethnic dividing lines as well. As a result of the war that led to ethnic cleansing and resettlement, some cantons are still mainly inhabited by one ethnic group.

By the constitution of the Federation of Bosnia and Herzegovina, cantons have the authority to regulate education, healthcare, social policies, and law enforcement. Each canton has its own constitution, government, and parliament assembly. In practice, cantons are similar to entities in terms of self-autonomy.

The local level consists of cities and municipalities.

In addition to administrative divisions, Bosnia and Herzegovina is also ethnically very divided. According to the state constitution, one member of the Presidency must be a Serb from Republika Srpska, while the other two presidents must be a Bosniak and a Croat from the Federation of Bosnia and Herzegovina. In other words, for example, a Bosniak living in Republika Srpska cannot be elected to the Presidency.

Ethnic dividing lines are also reflected in political parties, which cannot be described solely through the traditional right-left division. In addition to that, they also differ in whether they support democracy based on civil rights or a model where rights are realized through ethnic representation.

The right-wing parties (Bosniak SDA, Croat HDZ, and HZD 1990, Serb SNSD, and SDS) mainly support a system based on ethnicity. The Bosniak SDA publicly claims to support a citizenship-based system, but in practice works against it.

Center and left parties support democracy based on civil rights and are mainly multi-ethnic. These parties include the social democratic SDP and DP, as well the social liberal Nasa Stranka.

Currently, the acting High Representative is German Christian Schmidt. He succeeds Austrian Valentin Inzko, who held the position for 13 years.

Dispute of the electoral law

There was a lot of uncertainty surrounding the timing of this year’s parliamentary elections. However, the constitution of Bosnia and Herzegovina prohibits early elections and by law, they must be held every four years on the first Sunday of October. The ambiguities were caused by the inability of the ethno-nationalist parties to reach and agreement on the electoral law.

In summary, the disagreements related to the election law are about the fact that the Croat ethno-nationalist parties want to move to a more ethnically oriented election method. Serb ethno-nationalsit parties support this idea, while Bosniak parties are publicly against it. In practice, however, they have agreed to the demands of the other parties in order to maintain the current state, where the dominance of ethnic groups is maintained.

Progressive opposition parties, including the Social Democratic Party, oppose the new electoral law and want to move towards a citizenship-based political system. They also support legislative changes that would make the election process more transparent.

Disagreements about the election law led to the Croat ethno-nationalist party HDZ refusing to allocate funding to the budget for the organization of the elections. This was possible because Croats have their “own” ministers responsible for the use of public funds at every administrative level.

The situation was “resolved” when High Representative Christian Schmidt intervened and reserved funds for elections in the budget and made a few technical changes to the election law. These changes were mainly aimed at promoting the transparency of the election process.

Heading into the elections

More than a year before this year’s parliamentary elections, 11 different opposition parties formed a coalition that supported the same state-level presidential candidate. The coalition includes parties representing different ideologies and is led by the social democratic party SDP.

At the state, entity and cantonal levels, SDP headed to the elections as part of the same progressive coalition with which it formed the government in the Canton of Sarajevo after the 2018 elections. This made campaigning a little different than usual. The coalition includes SDP, the liberal party Naša Stranka and the centre-right party Narod I Pravda.

The progress achieved in the Canton of Sarajevo in recent years served as an example in the campaign of how parties representing different ideologies can work together for the benefit of all.

Based on the results, opinion polls, and social media comments, the joint campaigning enjoyed great popularity among citizens. Since the political reality of Bosnia and Herzegovina has been dominated by three ethno-nationalist parties, it was difficult for the coalition’s campaign to properly raise the promotion of political rights based on citizenship into the discussion.

The discussion about the different forms of the political system is a good thing in itself. However, what is problematic in the context of Bosnia and Herzegovina is that the same discussion has been going on for 20 years and ethno-nationalist parties mainly use it to maintain ethnic dividing lines. At the same time, important discussions related to the Covid-19 pandemic, inflation, the war in Ukraine, and the economic recession will not take place.

The second day of October arrived, and the polls were opened. The campaign ended and people got a chance to go to the polls. Despite the High Representative’s efforts to improve election arrangements, some of the changes only added to the confusion. This in turn led to a record number of reported abuses.

A few days after the election ended, the Central Election Commission ordered a recount of all votes from Republika Srpska’s 2,239 presidential polling stations due to the high number of reported irregularities.

According to the latest state statistics, a good 50 percent of registered voters participated in the elections. However, when taking into account those who have left the country and those have acquired citizenship in another country, the actual turnout is significantly higher.

The election results are twofold. At the state level, the presidential candidate of the coalition of 11 parties led by the Social Democrats received more than 75 percent of the votes. For the first time, a social democrat was elected president instead of a candidate from an ethno-nationalist party. Overall, however, the ethno-nationalist parties received the most votes in these elections as well.

As for the parliamentary elections, the Social Democratic party’s result must be viewed through the coalition it leads. The coalition’s vote share was 31 percent if the centre-right party NES (Independent European Alliance) which supported the alliance is also taken into account. As a party, SDP received 13.5 percent of the votes. After the coalition, the Bosniak ethno-nationalist party SDA received the second largest number of votes, 21.5 percent.

The election results of the Federation of Bosnia and Herzegovina look pretty much the same. SDP’s three-party coalition won with 25.2 percent of the votes. If NES is taken into account, the combined vote share of the coalition is 29.5 percent. The second is the Bosniak ethno-nationalist party SDA with 24.5 percent.

In Republika Srpska, the ethno-nationalist ruling party SNSD received more than 42 percent representation in the parliament.

At the cantonal level, it is worth mentioning that SDP’s majority remained in the Cantons of Sarajevo and Una Sana.

Based on the election results, it cannot be said that ethno-nationalist parties lost. Although their support decreased slightly, they are still the largest parties. However, the electoral success of the SDP-led coalition significantly changed the balance of power. After the elections, it is the largest group in the parliament and will lead the government negotiations.

Despite the alliance’s victory, SDP as a party lost ten percent of votes since the 2018 elections. The support of ethno-nationalist parties also decreased by 15-20 percent. The electoral success of new parties partly explains the decline.

The election results show that two changes are currently underway in Bosnia and Herzegovina. The first change is symbolic. For the first time, the Bosniak president will be a social democrat and outside the ethno-nationalist parties. It will limit the influence of the ethno-nationalist party SDA. Another change is that the progressive coalition led by SDP is the largest at both entity and national levels and will lead government negotiations.

Although the progressive coalition is the largest, it cannot form a new government without concessions. One option is that the ethno-nationalist parties form the government again, ignoring the largest coalition, because purely mathematically they can do that.

In both options, ethno-nationalist parties will have a lot of say. However, it can be considered positive that in the new government, reformist forces can at least try to steer the decision-making in a more progressive direction.

Hamza Pecar works as a project coordinator in the Sarajevo-based Forum of Left Initiative. FLI is an association of political activists of left political orientation, civil society organizations, and trade unions, which see the future of Bosnia and Herzegovina in developing and advocating a society based on social justice and solidarity.